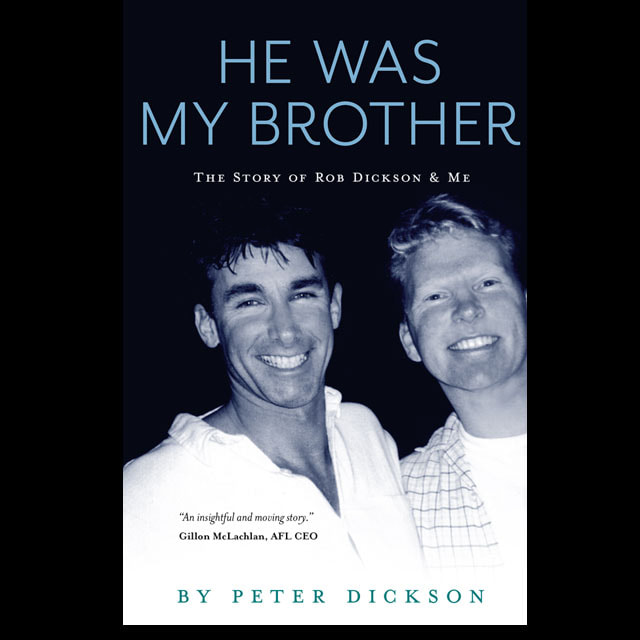 He Was My Brother

One phone call, one sudden unexpected tragic event in a distant land. That’s all it took to shatter one man’s world and his close-knit family into a thousand pieces.

But none felt it more than his hero-worshipping younger brother, Peter. The bond between them was unbreakable. From an early age they were far more than brothers. They were mates, buddies, best pals and eventually business partners.

Rob’s death hit Peter harder than he or anyone could have imagined. The aftershock has lasted for years, taking its toll not only on Peter’s mental and physical health but also his family and business relationships.

In this uplifting memoir of survival and recovery he tells with brutal honesty of his fight back from intense despair, with Rob as his ever-present inspiration and guide.

He delves back into the pair’s childhood under the strict but loving eye of their Bible-quoting mother, traces Rob’s larrikin rise into the world of Australian Rules and details his ongoing struggles to rival his brother’s skill behind the camera.

An immensely readable story of highs and lows told with the sharp eye of one who has beaten the odds to reach the peak of his profession as an award-winning documentary filmmaker.

Pete Dickson is an incredibly talented filmmaker. I have known him now for two decades and my admiration for his work and his immense artistic contribution to our country only continue to grow.

More importantly, Pete is a wonderful person. He is a loving father, husband, son and brother who is part of a big family. All families can speak of the love and the pain that you witness across the years, how you deal with the challenges of life and the difficulties of coping with tragedy, and the long-term impact that events can have upon you.

In this book, Pete honours the life of his late brother Rob, his hero and his best friend. It tells exquisitely the story of his own journey through life, from the child finding his own way in a big family, to an adult finding his way in a big world.

At times it’s tough, and at other times it’s joyous. It is filled with triumph, disappointment, happiness and terrible grief, and is a compelling story I urge you to read because it centres around love.